On March 7, 2019, Prime Minister Shinzo Abe held the 24th meeting of the Council on Investments for the Future (COF) at the Prime Minister’s Office, and in the materials noted “parent-child listings are difficult to govern, and minority shareholders of subsidiaries could be mistreated”. The government views corporate governance of such listings as an issue, and regulations are being tightened, with the listing obligations of parent companies being scheduled to increase on the Tokyo Stock Exchange (TSE) starting February 2020. The following is a summary of parent-child listing regulations in chronological order, indicating that rules are being developed at a rapid pace led by the government.

The following chart shows the number of listed parent-child subsidiaries to the end of 2018. With stricter regulations, the number continued to decrease by another 15 companies in 2019. 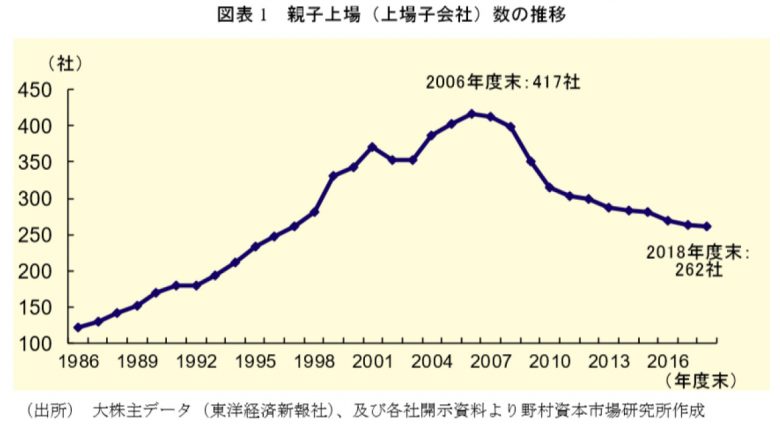 TOPIC①：Investor opinions during 24th COF meeting (held 3/7/2019）
The following are some investor opinions expressed during meeting.
■Outside independent directors, who are supposed to represent minority shareholders, have not listened to investors or shared information is concern.
■Shareholders of the subsidiary asking for dialogue with the parent company are refused on the grounds that the subsidiary is independent and hence dialogue should be with the subsidiary. As a result, subsidiaries become a “manager’s paradise”, and the stock price is often discounted.

TOPIC：The duties of directors of parent companies
Indication of government policy views on the matter are found in the explanatory materials from the Corporate Governance System Study Group held on June 22, 2018 by the Ministry of Economy, Trade and Industry (METI) where it is stated, “In the discussion of the Legislative Council at the time, there were many opinions in favor of the view that the parent company directors had an obligation to manage the shares of the subsidiary as an asset, and there existed a role of parent company’s director in supervising the subsidiary”.