Over the last 5-years Chori’s PBR has generally maintained an average below 1x.
The fact that PBR is less than 1x means that degree to which capital is how efficiently used (ROE) is lower than the expected return (cost of equity) required by shareholders.*
*Assumption based on an equity spread based approach where the lower the ROE relative to the cost of equity, the lower the PBR. 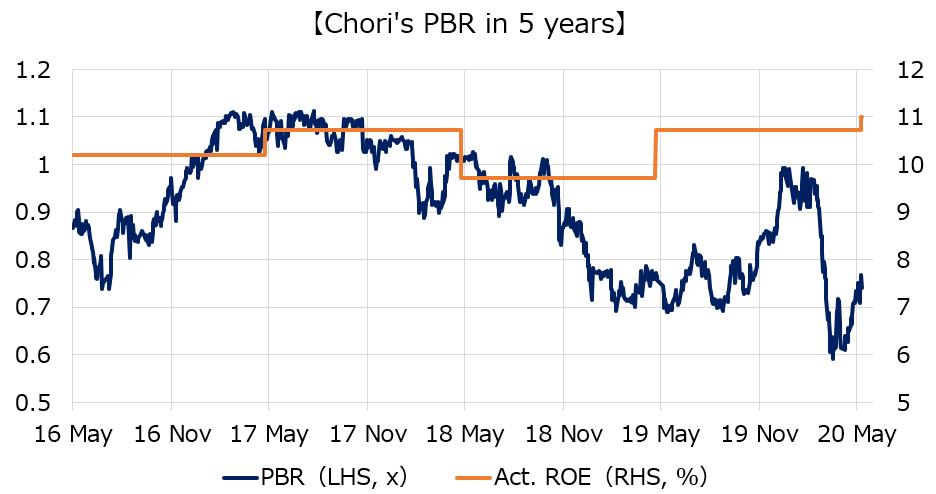 Chori’s equity capital has grown significantly compared to before the Global Financial Crisis in 2008. On March 2005, the equity capital 15.5 billion yen, but as of March 31, 2020 had increased to 57.2 billion yen (to an equity ratio of 50%). As a result, ROE has dropped from around 20% to around 10%.
The reason for the decline in ROE is (1) a capital allocation policy where the majority of net income accumulates as equity due to a low dividend payout ratio and (2) an inability to increase net income compared to the accumulation of equity.

TOPIC：Early completion of Mid-Term Management Plan
Chori announced a 3-year plan in April 2017 ending in fiscal 2019. The plan was conservative, aiming only for the same level of ROE as FY2016. However, despite meeting the target in FY2018, no adjustment was made for FY2019.