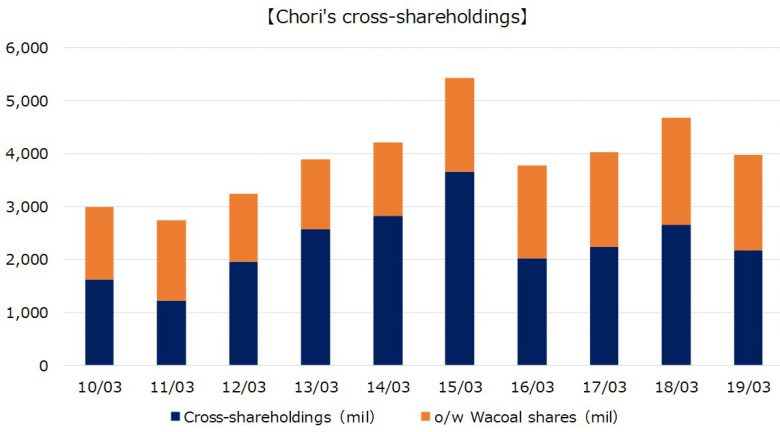 Strategic Capital had an opportunity to meet with Wacoal on June 2015, where we asked them their view on the disposal of Wacoal shares held by Chori. The response is as follows:

“In the past, we asked them to hold for strategic reasons but we have no issue with them selling it now and even if they were to sell, it would not impact our dealings with them”.

This was communicated to Chori but they have stubbornly decided to continue holdings the shares during the board of directors meeting as they believe “there is purpose in maintaining and expanding transactions” with Wacoal.

In their Corporate Governance Report, Chori advocates the following policies regarding holding and reducing cross-shareholdings.

Policy on holding and reducing strategically held shares
The Company and its subsidiaries may acquire and hold shares in listed companies for the purpose of maintaining, expanding and sustaining their business. At that time, the department to be in charge of the acquisition is determined and the management status and profitability of the investment is considered with the decision on whether to acquire being determined by the Board of Directors. In addition, the significance of holding the shares is discussed annually and those that are determined to no longer serve a purpose are considered for reduction or selling entirely.

First, deals are something that should be acquired on the “strength” of products or services so we find it difficult to understand why Chori, through holding the strategic shareholding, business will be sustained and expanded.

Also, even assuming that cross-shareholdings will contribute to “maintaining and expanding transactions”, we struggle to understand Chori’s rationale to hold shares where we have already determined, “would not impact (Wacoal’s) dealings with them”